May you find yourself reflecting on what’s He’s done. This post is a more recent take on one done a few years ago about what today brings and how the death of a Friday can mean so much in our lives. 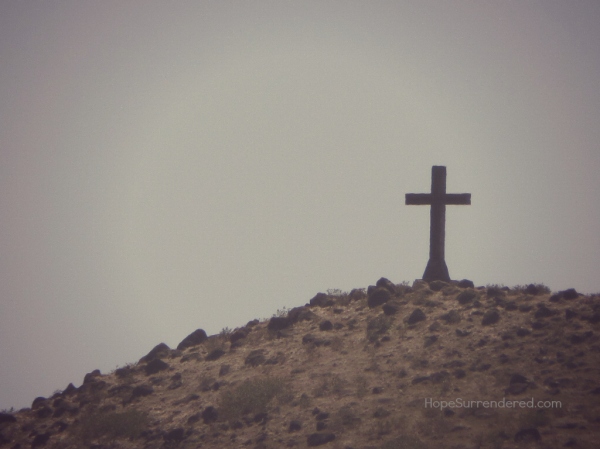 Good Friday.  It’s a rainy morning here in rural Appalachia, and it seems fitting for the day Christians around the world mark as one of death and darkness.

…To be beaten, flogged and scourged with a barbed whip until nearly unrecognizable;
…To have a crown of thorns pressed into my head;
…To be nailed to a tree with spikes through my wrists and feet;
…To die by crucifixion alongside common criminals…

No. None of this, I’ve imagined, could be good if I would have to experience it.
I haven’t had to, but I know Jesus has experienced it all.

How could it be that we’d wind up called this a “good” kind of Friday when He had to go through such incredible torture?

It’s about 8 a.m., and I’m sipping my coffee while still in my pajamas and fuzzy slippers. I’m reflecting on the ups and downs and the clarity and confusion over the years in my own journey of faith. I’m also reflecting on what must have been going on more than 2000 years ago. My comfort of today makes me feel uncomfortable in comparison to what He must have been going through in these moments.

Jesus was nailed to the cross in the morning at about 9 a.m.** after enduring questioning, a trial and brutal beatings.

Once that cross was set into place, He hung there until noon**, at which point the skies overhead darkened.

I don’t know if it was a rainy day on the hill of Golgotha that morning in Jerusalem as it is here in the hills of Appalachia, but I have a feeling it wasn’t. God often allows us to see great contrasts in revealing His will for our lives, and that tends to make me think it was a sunny day in Jerusalem.

The darkness lasted for three hours, and around 3 p.m.**, Jesus cried out amid His suffering and suffocation to proclaim, “Tetelestai!”  before giving up his spirit and breath of life.

Most of us automatically equate the “it is finished”  to His life, since, just moments afterward, His life was over on this particular Friday afternoon – the day we commemorate in remembrance as “Good Friday.” However, the “it is finished!”  was much more than just a part of the final words he uttered in the final moments of His life before giving over his life and spirit.

The “it is finished!” was His “paid in full” proclamation regarding our sin.

That’s where the “Good” comes in. He suffered for us. He demonstrated his self-sacrificing love for us and for our wrongdoings by dying for us (Romans 5:8). What He did for us once does not have to be repeated by all of us (1 Peter 3:18) in order for us to live eternally in His presence (John 3:16).

For the longest time, I didn’t understand how His death could be “good” and recognized as “Good Friday.” I knew He died for us, but I guess I just didn’t fully grasp that He died for ME.

Almost 15 years ago, I went to a new church. On my first visit to this church there was a song sung which stood out to me. I didn’t know it, so I didn’t sing it. I just listened.

There can be such power in doing that once in a while.

I didn’t understand what the words meant, but that song awakened something within me.

The song was Above All.  The words which resonated with me were:

“…crucified, laid behind the stone.”
I understood this.

“…lived to die, rejected and alone.”
What did this mean?
Ok, He died on that cross, but what did it mean that he “lived to die?”

I’ll never forget those words. Even today, they still hold meaning to me. It’s like the stone of death and darkness was rolled away in my own life in some of those moments. An awakening within me had begun. I had come to that new church with questions, but now – after only one visit – there was an even bigger question burning within my mind…and in my heart. It was one that would lead to knowing what He did for ME, and one that would lead to me knowing HIM personally.

That’s what is good about Good Friday.

That’s what is good about Good Friday.

There’s a hope to be found, a purpose for this life, and a plan for your future. It’s all a part of the “good” in what was done for us. If you know the story, but you don’t know Jesus in a very personal way, I encourage you to take some time today to reflect on these thoughts and to think about them.

He also died for you. That’s what is good about Good Friday.

**Notes about the times of day:

It is believed the Gospel of John, which presents a different time for the start of the crucifixion, used a Roman method of time calculation, which would have started the day at midnight (John 19:14). There could have, however, been a three-hour period of time between his sentencing before Pilate (sixth hour) and time Jesus spent under the charge of the soldiers, time spent carrying his cross (John 19:17) and arriving at Golgotha where the crucifixion took place.

Various commentaries show a consistency in these interpretations of time. I’ve used Sonic Light, The Bible Knowledge Commentary, and Got Questions for my sources in this post.

One thought on “Finding Hope in Friday’s Death”