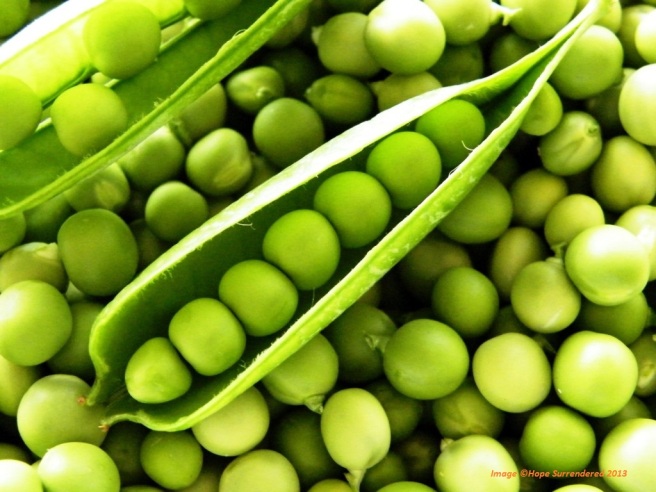 The peas are finished.  An abundant bounty was provided and reaped.

I spent a lot of time preparing the soil, selecting my seeds, planting with care, pruning seedlings, pulling weeds and praying over what I hoped would grow. My wish was to provide healthy, organic veggies to my family and feed my interest in gardening.

At the first picking, I was like a child who had gotten into a jumbo bag of chocolate candies. Really! That’s how excited I was to get out there and pluck the pods from the vines! I was so pleased with how the peas had grown. As I was picking, I’d pop open some of the pods and taste the freshness contained within. Some of the peas were nestled in their pod in a perfect row; others were odd-shaped or off-kilter when cracked open. Some should have stayed on the vine a little longer (my yearning to pluck them got the best of me), but their sweetness was still divine.

There were a few more pickings that followed, but the bounty was less each time. My excitement seemed to lessen with each subsequent picking.

The time came to decide if I thought I’d get any more peas. There were a few flowers and even fewer flower buds, so I left the vines in place with the hopes of getting one more small crop. I did, but it was only enough for one family dinner.

Once I knew the supply was exhausted for the season, it was time to pull the vines. Have you ever grown peas before? There are an abundance of vines. Each dried pea planted is a vine grown. The vines are leafy and full. Pulling the vines led to the discovery of a tiny weed and bug menagerie living at the soil level.

With each handful of vines I pulled, I’d say a little prayer of thanksgiving for the abundance provided. (When I’m in the garden, I talk to myself, and I talk to the Lord a lot.) Cleaning out the vines, weeding the new space, turning over the soil and preparing it for the next planting was not as fun and exciting as it was when I did it for the first planting, but it was rewarding since I knew the bounty would grow with some care and nurturing.

Gardening doesn’t always turn out successfully with a single crop or even within a single season, but, overall, an educated gardener should be able to expect a satisfying crop over the span of seasons.

Life doesn’t always turn out exactly how we’d like it to in a day, a month or a year, but an invested believer can trust in that which is promised.